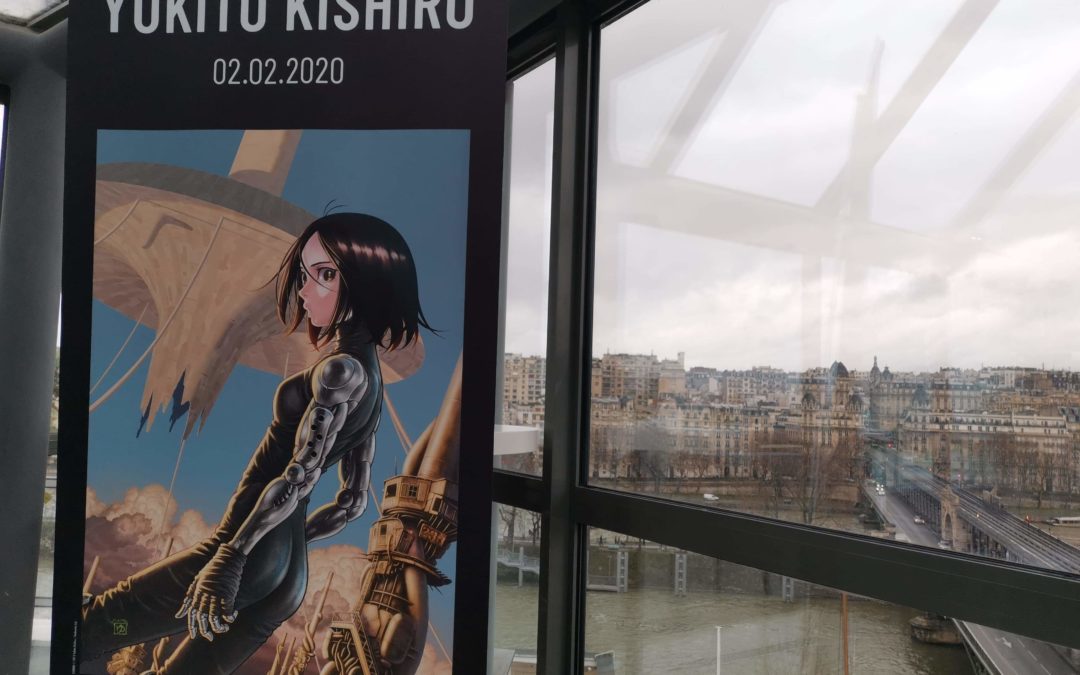 Following his attendance at the Angoulême International Comics Festival, Yukito Kishiro, the manga author behind Gunnm, better known as Battle Angel Alita in English, held a panel in Paris to which a small selection of fans was invited to. The French publisher for Gunnm, Glénat, selected about twenty people on social media to ask M. Kishiro some questions over the event.

First of all, do you have anything to say about the Angoulême festival you have attended?

Yukito Kishiro: Angoulême is a charming, historical city, and I was very touched by the exhibition dedicated to my work.

To introduce this panel, you could maybe start by explaining to us the meaning behind Gunnm?

Yukito Kishiro: Gunnm is composed of the word “GUN” and “MU” 夢 the dream, as in a gun’s dream. When I started writing Gunnm, I thought of it with a focus on firearms, but as I wrote, it changed into a series with martial arts, and it didn’t have anything to do with guns anymore. I got worried and asked my publisher if we could keep the title nonetheless, which he agreed to. Even though I changed the story, I still find the title fits it very well. “GUN” shows the harsh brutality of the reality where “MU” stands for spirituality and the kindness of the soul.

How do you view the success that Gunnm has encountered in France?

Yukito Kishiro: I’m very grateful for the French and the love they have for my work. Gunnm has been published throughout the world in various languages. It has been published in the USA, Germany, Italy, and so on. But often it was translated from the English title, Battle Angel Alita, hence why in many countries it was published under this name. In France, the name has been the Japanese title from the get-go, I think it contributes to a better understanding of my work overall and why they have been so supportive towards it throughout the years.

Under what circumstances did you create Gally’s character?

Yukito Kishiro: People often ask me why I chose a girl as the main character of my story. To me, it came very naturally. In my last year of high school, I wrote a story where the main character was a girl too. It is true that in Shonen manga protagonists are mainly males. Still, if you take a look at anime, there are many more female leads, for example, Nausicaa in Hayao Miyazaki’s movie. Before Gunnm, I had written a manga named Reimeika about cyborgs. Unfortunately, I could not make a series out of it. Among the side characters of this manga, there was a cyborg officer named Gally. My editor back then suggested I’d do a story about her, which led to the creation of Gally as the main character for Gunnm. In Reimeika, she was a mature woman fed up with life, so I ended up changing the figure a bit. In the end, writing a story with a female lead suited me better as I was able to more easily take a step back on to how the character would act. When I was writing Reimeika, which had a male lead, if he was in a hassle, I would put myself into his shoes and wasn’t able to figure out how he would get out of it. I also heard that if Gally’s name was changed into Alita for the English language, it’s because it has a bad connotation.

In an interview you gave in the ’90s, you said you were an anarchist and that you poured this ideology into Gunnm. Could you provide more details on the matter, and is it still true to this day?

Yukito Kishiro: I have to admit I don’t recall saying that. It’s true that when I was younger, I may have held some anarchist opinions, but I would rather say it was youthful insolence. I probably held such opinions to show myself as someone different from the rest of society. I have changed since then, and I hold very different views on society today.

Since we’re talking about change, your drawing has changed over the years too. Can you elaborate on how your style has evolved throughout the years, and is it linked to you changing as a person?

Yukito Kishiro: I am a self-taught artist. I have never taken drawing lessons and have not learned as an assistant from another manga artist. I have acquired many books and did many tries and experiments. Today I am still looking to get to the best drawing style possible. 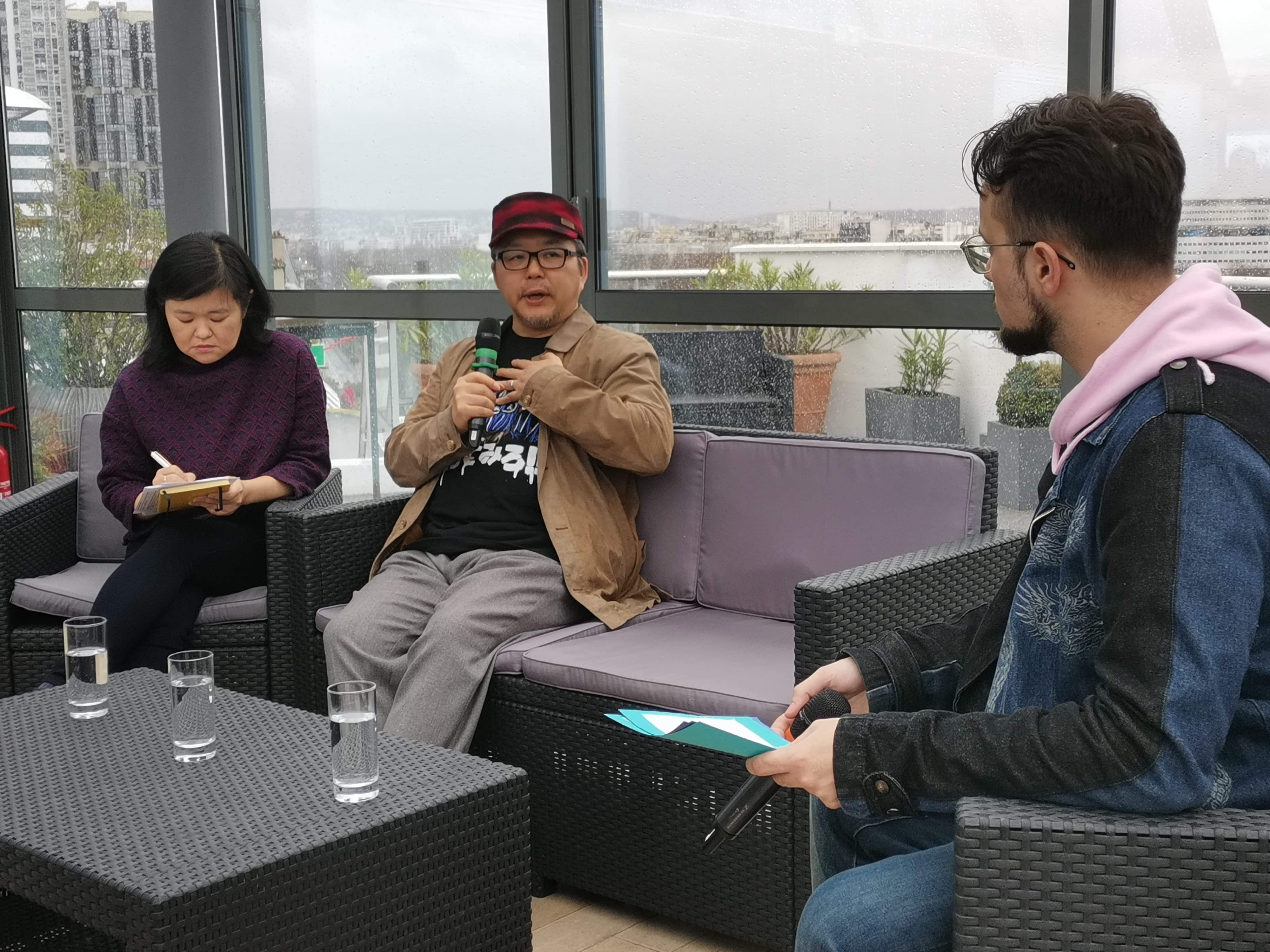 In 1995 you started working on a video game title, Gunnm Kasei No Kioku for Play Station, which was published by Banpresto. Would you consider having other video games based on Gunnm done today?

Yukito Kishiro: Yes, I would very much like to see a Gunnm video game done with today’s technology. I also would love being able to play it. It’s one of my dreams, so when the Hollywood film started production, I asked if we could consider making a game. Mr. Landau answered that if the movie were a hit, they would look into it.

Could you tell us about your implication of the anime OVA adaptation of Gunnm and the differences it has with the manga? Is there any chance of seeing another Gunnm anime in the future?

Yukito Kishiro: When I was presented with the project, there were many points I did not agree with, so I rejected it. It started nonetheless, and I was brought to Tokyo for a production meeting where I was shown the storyboards. Some aspects didn’t suit me, so I asked for some changes and corrections. The production team answered that they didn’t have the time to make those changes, which had me wondering at the point of this meeting. I wasn’t satisfied because I could not give any insight into it. I would very much like for a new anime adaptation of Gunnm to be made, but it will be hard since when the rights to the movie adaptation of Gunnm were sold, the rights to an anime adaptation were sold to FOX, which was then bought by Disney. Today, Disney holds the rights to the anime adaptation rights for Gunnm. Just like for the video game, and eventual animated show required the movie to be successful. There isn’t any concrete project as of now.

You are wearing a Hokuto no Ken T-Shirt today. Could you tell us how Tetsuro Hara’s work influenced you? Also, which character from Ken is your favorite?

Yukito Kishiro: I first discovered Hokuto no Ken when I was in high school and was reading the manga’s weekly publication as well as the anime. I was impressed by how the way the muscles were drawn and by how Hara shows their volume. I was most influenced by his work in how he uses frames. Hara alternates small and large frames to pace the rhythm. I was also inspired by the shape of his text bubbles and onomatopoeia. Regarding my favorite character, I like a lot of them, so it’s hard to pick just one. Among others, there’s Jagi, as you can see.

How has the use of digital tools changed the way you work?

Yukito Kishiro: I started using the Internet in 1997. Back then, I was told that I had readers overseas, but I didn’t believe it. Ever since I started my website, I had foreign fans send me messages directly. This is how I realized some people enjoyed my work oversees. Regarding working with digital tools, I started working with them in 1995 to do coloring, which led me to throw away all my material for analog coloring. Ever since then, I only worked on colors on a computer. For a while, I mixed analog and digital in my work. I first drew the lines with ink on paper, scanned it, and then worked on it on Photoshop. I did the framing on the computer. That’s how I worked in the 2000s up to last year. After the movie’s premieres showed, I started working on a tablet using the Clip Studio software. I stopped working with ink and paper at all. I sometimes feel nostalgic about ink and paper. It feels more motivating to draw with them. But at the same time, the maintenance work for all the tools takes time and knowledge, which are not required for digital work. When working in digital, it’s easier to correct your drawings, so I’m glad I switched to it.

Are there any foreign comic authors who inspired your work?

Yukito Kishiro: Maybe Moebius? Also, there used to be an SF magazine published in Japan named Starlog, which highlighted foreign artists. They often showed some frames from foreign comics, and even though I would not understand the text, I would feel inspired by the style.

How did you get the idea for the Motorball, and what were your influences on it? Did Norman Jewison’s Rollerball inspire you?

Yukito Kishiro: There were several influences for the Motorball. First of all, the Rugball in Buichi Terasawa’s manga Cobra. He’s an author for which I hold profound respect. My second inspiration was the anime Armored Trooper Votoms which I loved when I was young. Back then, Formula 1 and Ayrton Senna were very popular, and I felt like including a high-speed car sport.

How has the study of philosophy influenced your work?

Yukito Kishiro: I didn’t go to college, and I did not study philosophy in school, but I had always been interested in this topic. When I went to a bookstore and passed in front of the philosophy aisle, I always wanted to buy all the books, but I couldn’t afford them all, and I had trouble choosing just one. Back then, I was feeling depressed and had a lot of concerns on my mind. It felt difficult being alive. Back then, philosophy saved me, mainly Nietzsche’s Thus Spoke Zarathustra.

Gunnm has a hard SF universe. How did you approach this aspect of your work?

Yukito Kishiro: Ever since I was little, I have been interested in Science and used to read many publications and science fiction works that based their world on authentic scientific theories. If the Science Fiction model wasn’t rooted in actual Science, I found it hard to believe and get in the story. For Gunnm, I wanted to include some scientific aspects we do not master yet. For example, regarding the city of Zalem, it’s not just an imaginary floating island, it has to be supported by scientific models, it’s essential to me. I read a lot of scientific research papers online too.

Scientific progress brings us closer every day to human enhancement, and soon reality will catch up with fiction. What’s your opinion on these technical upgrades?

Yukito Kishiro: I feel pleased about some technologies which have been developed, for example, the improvement of prosthesis that help disabled people in their daily lives. I fully support these evolutions. However, when I read about the US army trying to implant microchips in people’s brains to control them, this is something I am against.

We are very grateful for being able to participate in this event. We would like to thank M. Kishiro for his time as well as the whole organizing team.