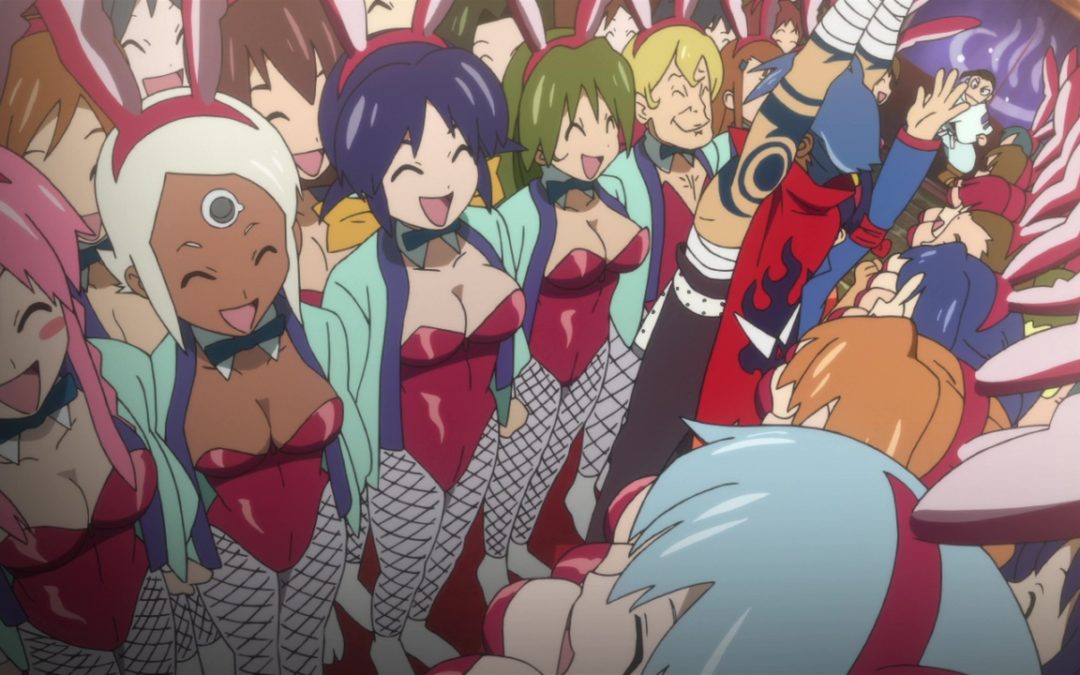 You can read the previous parts by following these links:

Gurren Lagann: the most talked-about, high-quality TV series of the 2007 anime world. A series into which Gainax poured all its might with the catch phrase, “the biggest robot anime of the 21st century,” and which became a new masterpiece under first-time director Hiroyuki Imaishi. Even after its initial run, the series is continuing to build its fanbase with impressive DVD sales and late night reruns. With that in mind, Anime Style presents a 27-part Gurren Lagann ‘various talk commentary interview’ web series. We were joined by both director Imaishi and assistant director Masahiko Otsuka for a frank discussion of their memories.

During their travels, Kamina and company are invited to a suspicious hot spring. While there they reunite with the black siblings, and at first glance it seemed to be a luxurious paradise, but in truth it was a fearsome trap by the wolf beastmen! Masahiko Ohtsuka wrote the script while Shin Itagaki directed and storyboarded this episode filled with action and comedy. Of course there were plenty of sexy scenes in this episode as it is based in a hotspring. Due to some of the extreme content, the TV version was replaced with a compilation version, but the DVD received an updated version named “There are things I just have to see!”

Ohsuka: So with Episode 6, what should we start with? The broadcast version or the uncensored one?

Both please, (Laughs) This interview has to be done in one go as well.

Imaishi: Ah, well that was the ep where we went full throttle with the sexyness. The first thing we decided when composing the series was that there would be a hotsprings and swimsuit episode. So Ohsuka said “Then should we go with the hotsprings ep first?”

Ohsuka: The first thing I said was “We’ve definitely gotta have hotsprings and swimsuits!”

So the uncensored version’s script was originally written by Ohtsuka, but the one that aired on TV credited Kazuki Nakajima, right?

Ohtsuka: That’s right, at first I was doing it on my own. I had the rough idea of involving a hot spring in the episode, but it was the director and Nakajima that came up with all the ideas and a part of my job was to sort that out into an ep, it seems.

Imaishi: There aren’t many who could pull that off so well.

Who came up with the idea for the mosaics?

Imaishi: That was Nakajima. (laughs) He was really excited, and said something like “I have a great idea!”

Imaishi: Mosaics are kind of risky….I wonder if we can do this on air…is what I was wondering, but no one can stop us, (laughs) The producers and Aniplex can’t do anything to stop us so we figured “Hell, why not go for it?”

Ohtsuka: At the time I was making episode 6 I myself was worried…”Will this really be able to air on TV”? And kept confirming over and over “Is this really okay?”

Imaishi: When we entered the scenario and storyboard stages I persistently continued to ask that we check to make sure it was doable. I didn’t want it to be nitpicked after everything was said and done, though just as I figured….

Imaishi: At the time we weren’t sure what time the show would air which was particularily vexing for me. Was it going to be in the morning? Late afternoon? Late night? They weren’t able to give me any confirmation, and I thought to myself. “C’mon and make up your minds already!”

Ohtsuka: I recall the decision coming down for Sunday morning, but expectantly it ended up changing a bit, I think.

Imaishi: So, for a bit, I heard things like “Late afternoon would be difficult” and “it’d be either late night or UHF” and so I wouldn’t have to worry about it too much I quietly made something that could stream on UHF someday or so I thought.

So you left episode 6 as is, while Nakajima added a bit to the script and a different version aired on TV?

Manabe (Public relations): It was a big deal back then. The instant it was decided that the episode couldn’t air as-is, Ohtsuka snapped “I’m not writing an explanation on the blog!”

Imaishi: Back then we were all pretty passionate about it. “We’ll show them what it’s like when Gainax goes crazy” was the shared emotion, lol. Everyone’s voltage was charged up….back then Nakajima who was the most into kids stuff back then even commented “Kids should watch this!” Though that was probably the most adult thing anyone said, (laughs). The final word handed down was like “I see” to everyone.

Ohtsuka wrote the contents for this episode in high spirits, then?

Ohtsuka: Well, I thought the scenario for the episode should be pretty serious. Yeah, it’s a hot springs ep, but I didn’t want it to be dumb….though there were some dumb jokes involved, there was also foreshadowing to events that hadn’t happened yet. They didn’t make it into the broadcast version, but the real episode 6 starts off with the Spiral King’s conversation.

Imaishi: It was cut for the TV version, huh.

Ohtsuka: From there there it had been established that the beastmen are only active during the day, so I got to thinking “Then should we have nocturnal ones too”? Also I wanted to properly address Simon’s feeling’s to Yoko as well…that’s why I was concerned if episode 6 didn’t happen those threads wouldn’t tie together.

Imaishi: It was truly painful.

Ohtsuka: It’s why I was angry with the people who made that decision, not so much because I’d have to change the script, but because I wanted them to “take a closer look at the essence of the work”. Rather than it being a case where the ep doesn’t matter it is on the contrary one that is necessary. I didn’t necessarily create it with that mind….is what I thought, though the storyboard does strongly rely on comedy.

Imaishi: Perhaps that’s impression they got after seeing it.

That feeling of restlessness is good, right? What of Shin Itagaki?

Imaishi: In the uncensored version, the part about the dial turning and removing the towels was added in despite not being part of the original scenario. I remember when I was eating in the Gainax kitchen, Itagaki said “I wanna do this” and with a big laugh I said “That’d be cool” and then he said “I actually already drew it”. (Laughs) That storyboard was on an epic scale, wasn’t it?

Ohtsuka: It was great. It’s ideas like that that lead to the kanchou ass poking gag being added to the storyboard.

Imaishi: That’s right, the kanchou to the ass and returning again lead to the “pierce my ass” development….all of that was Itagaki.

Ohtsuka: For me, I wasn’t going to have any toilet humor except what you and Nakajima came up with.

Imaishi: (Laugh) Then you shouldn’t have added any more.

Ohtsuka: Yes, in the completed version there wasn’t much of it left, but in the scenarios development phase, Yoko was a bit more suspicious of the inn. While Rossiu was completely skeptical of the whole deal, he still went along with Simon and Kamina in their idiotic antics, but Yoko was still somewhere in the middle, so there was a scene where even when she got in the bath she hid a pistol in her hair, but that was pretty much completely left out, and she was pushed to have fun with the others while Rossiu being an idiot with them was left out (laughs) the actual script for episode 6 was radically different than what it was when it started.

Imaishi: It’s hard to believe it was written by the same guy. (laughs)

Ohtsuka: Though as far as the storyboard is concerned, I felt like that momentum came naturally.

Imaishi: This might be me singing my own praises, but, I added my own thing during the storyboard check, it was the Lagann’s last “booom!” when it came flying out –where you could see Rossiu underneath riding in the Gurren blowing all of the rabbit gunmen away. The only thing he said was “I got in with fighting spirit and it moved” or something like that, though everything was ruined in that instant, (laugh).

Ohtsuka: That was a good part.

Imaishi: When that part of the storyboard was done I remember being completely satisfied and feeling like “I did it!” (laugh) I wanted to do all kinds of pointless things like that.

Ohtsuka: The supervisor –(Yuka) Shibata was sure interesting, yeah?

Imaishi: That was full of chaos too. Probably the highest level of sexual harassment was to give this episode to a woman to supervise, (laughs) It was pretty cruel. When we were composing the series, it was decided that “Yomako-sensei’s episode would be given to Shibata” but we ended up missing the schedule for that, so then it was like “well we’ll just have her go on now”, and had her work on episode 6. She and Itagaki were formerly from Telecom Animation so it should be fine, right?

Ohtsuka: In the end she had a lot of fun drawing it, huh.

On the contrary, it might have been too thick if a man had supervised it.

Imaishi: That’s right, it was probably for the best that we changed up the art so suddenly and smoothly. But when talking about actual movement, Itagaki is considerably rough, but in the layout we were able to bring that under control. I’m pretty sure there were a lot of newbies drawing the keyframes, yeah?

Imaishi: This was (Hitomi) Hasegawa’s first episode, but (Shouko) Nishigaki and (Keisuke) Watanabe had done keyframes before this.

Ohtsuka: It was the first time for the two of them? Even though we had youngsters at the core of this, I thought to myself “It’s incredible we’ve gotten here.”

Who’s idea was it to have successive GAINAX characters in the episode?

Imaishi: It was Nishigori’s idea. He had suggested “How about a Bunny”? And then he said “Wouldn’t it be cool if they were all Gainax characters”?

Imaishi: “Since we’re going overboard anyway, why not?!” Either way I thought it was fine, but I thought to myself “You just like Gainax characters don’t you”, (laughs) It was very like Nishigori. Though for that to work, we have to be glad that young Gainax fans are happy to see things like that.

That was also properly discussed?

Imaishi: Yeah, we were discussing how much we could parse episodes 4-6, and 6 was the one we decided to get a little heavy with the parody. Stuff like overdoing it for the anime otaku fell just about right for that ep. That being said, those character representatives were excellent. For episode six, the sub character setting was handles by (Yusuke) Yoshigaki, It was an amazingly maniac choice on his part, “Especially Ikoriina! And “Do you not know Nadia’s mother” and such…(laughs)

These interviews were translated by Twitter user @NohAcro This interview was originally published on Anime Style on 01/07/08.© 2020 Full Frontal