What lies behind the Majora’s Mask? – Interview with Takaya Imamura 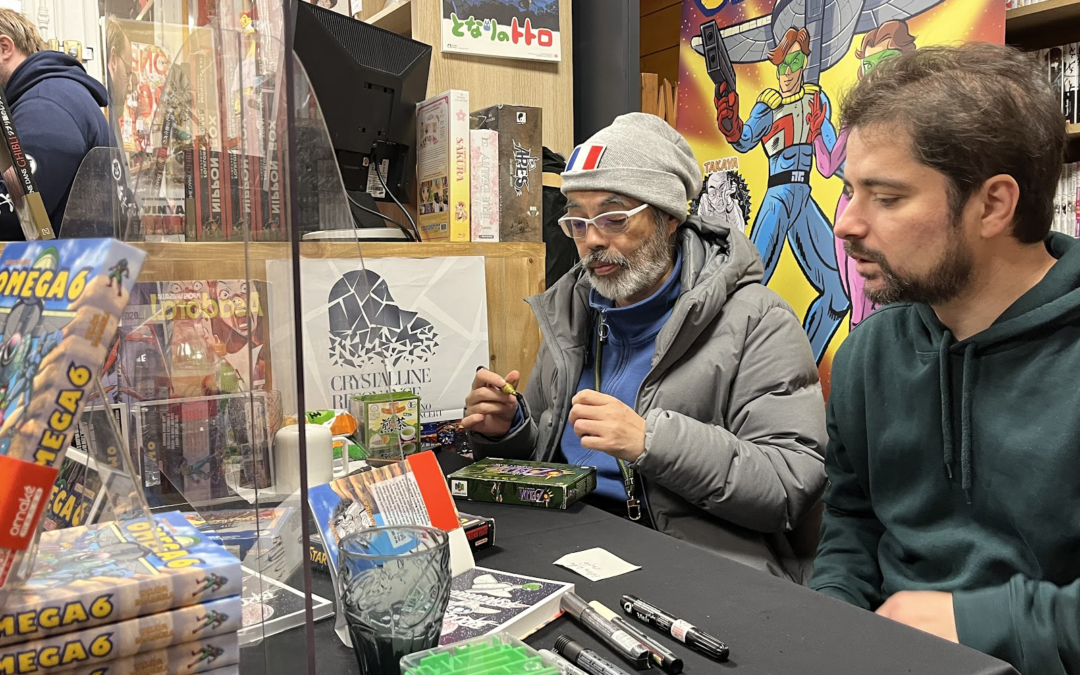 Despite their 30 years of career at Nintendo, Takaya Imamura isn’t as well known as you could expect seeing their resume. They were the character designer of iconic series such as Star Fox, F-Zero, and even the Zelda series. They designed characters such as Fox, Falco, and Captain Falcon, yet you don’t see a lot of fans knowing his name.

That may be because Nintendo isn’t known for giving much credit to its artists. You often see artworks of their series completely uncredited in the rare artbooks the company releases, like in Zelda Hyrule Historia.

Thanks to publisher Omake Books, its manager and interpreter Florent Gorges, and the bookstore Hayaku Shop, we had the chance to have a short but insightful interview about their interesting career.

Our content is only possible through your help! Please support us on Ko-Fi!

Takaya Imamura has a very distinct style, very different from most Japanese artists, and that’s why Nintendo recruited him in 1989. Nintendo wanted to reach a broad audience, so artists like Imamura, who was not too much influenced by manga and anime art, were very much wanted. Shigeru Miyamoto himself was impressed by the manga they brought during their interview for the company. At the same time, Imamura was filled with the dream of being able to draw video game box covers and booklets. Their first work was on the very first F-Zero, where they designed the iconic characters of the game as well as the famous comics-inspired booklet. 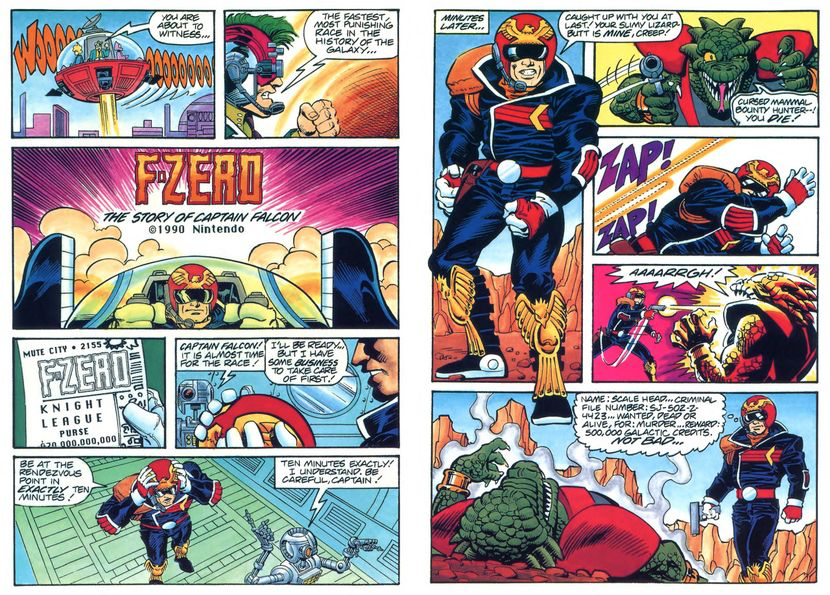 When you joined Nintendo, development for very technologically ambitious games like F-Zero or Star Fox were starting. What kind of challenges did you have to face as an artist with no experience in programming like yourself at the time?

Takaya Imamura: I indeed had no experience in that domain before. However, when I joined Nintendo, we had a one-month training period where we learned most of the technicalities of pixel art. Initially, on F-Zero or Star Fox, my main job was doing pixel art for those games.

In the game F-Zero X, there was a race map editor you could unlock using the 64DD that was never released in the West. Could you tell us how you came up with the idea of an edit mode in F-Zero X?

Takaya Imamura: It was released in the expansion kit in Japan. When we were developing F-Zero X, we were already using that map editor engine to create our own tracks in the game. I created a few of them with that engine, and we thought that it was a tool so well-made and intuitive that we could sell it to the players.

You said in the past that Star Fox 64 was the game of your life. Could you tell us what makes you think that?

Takaya Imamura: I said that because I was very involved in the game’s creation. I worked not only on the characters’ designs but also on the graphics, the scenario, and even the music and sound design. That’s why I say it’s the game of my life. 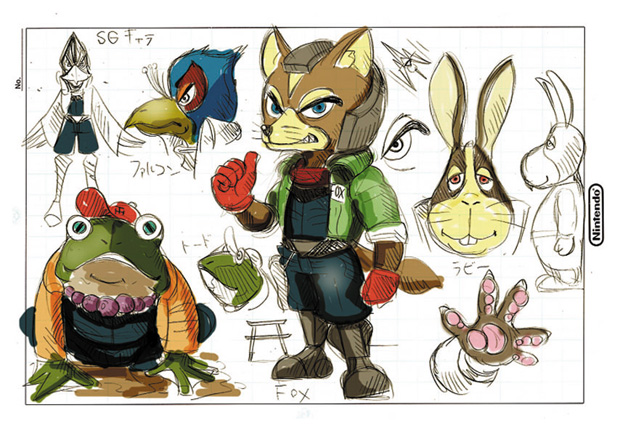 Designs of Star Fox characters made by Takaya Imamura

Takaya Imamura worked on the Zelda series as a pixel artist and dungeon map designer on The Legend of Zelda: A Link to the Past but their greatest addition to the series is, without any doubt, his work on the most singular game in the series, The Legend of Zelda: Majora’s Mask. They are the artist behind many iconic elements of the game, such as the Moon, Tingle, and even the Majora’s Mask itself, which the Japanese name, Mujura, is a pun between Imamura’s own name and Jumanji. The wonderful artwork of the game showcases Imamura’s greatest strengths. Their distinctive style and ideas give a general direction to the other artists in the team, such as the incredibly skilled Yusuke Nakano, and they create a unique and distinctive art direction. 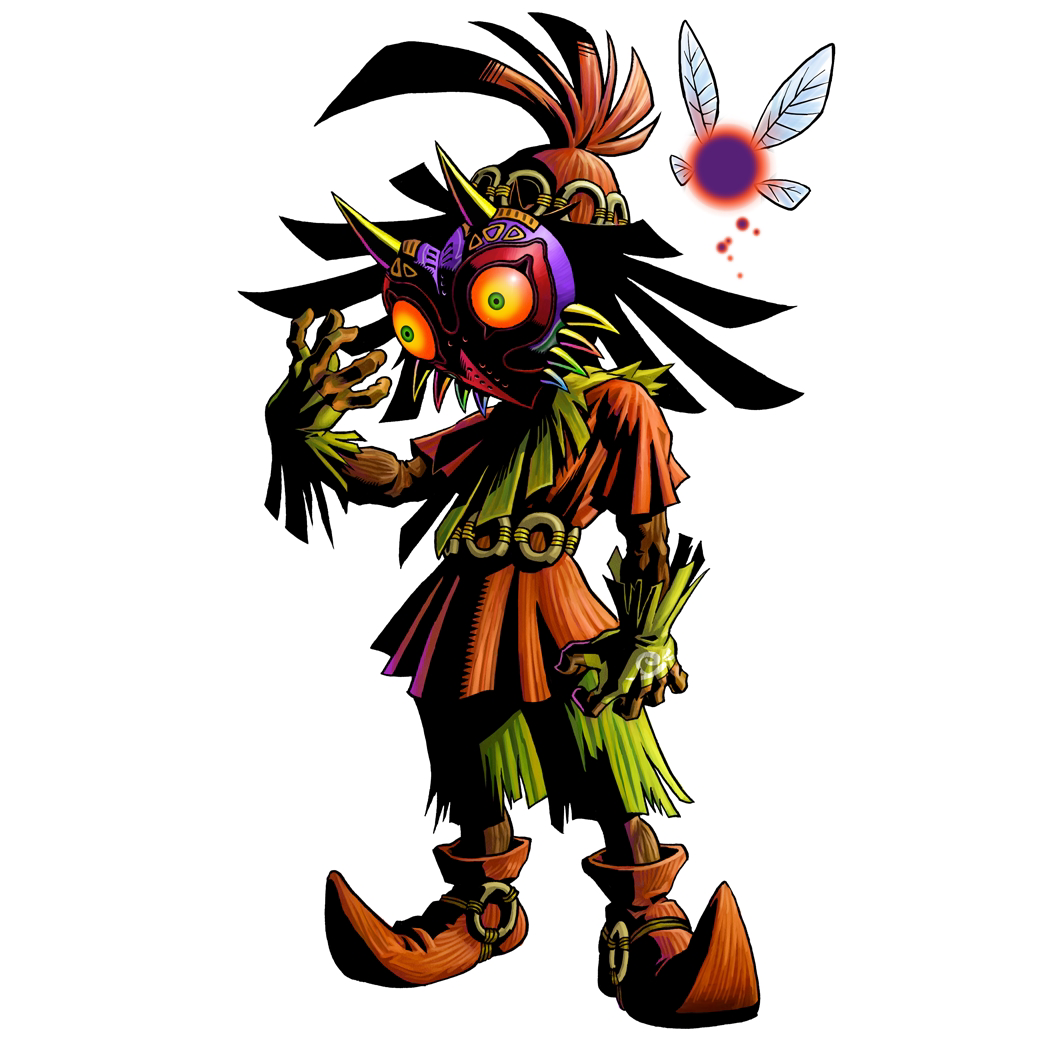 The Legend of Zelda: Majora’s Mask is a game that takes a major shift in tone with the rest of the series, and you designed many of his iconic elements. Could you tell us why you went into that darker and crazier direction for the game?

Takaya Imamura: The president of Nintendo at the time, Hiroshi Yamauchi, came in and told us that the previous game in the series, Ocarina of Time, sold very well and that we had one year to make a sequel for it. Therefore, the first prototypes for the game looked a lot like Ocarina of Time, so I said that we really had to change the game’s overall atmosphere so that it didn’t feel too much like Ocarina of Time. The director of the game Yoshiaki Koizumi then came up with the idea that the moon was supposed to crash in three days, so just with that starting point, we naturally went into a darker direction for various elements of the game.

The artworks of Majora’s Mask are recognizable with those high-contrast black shadows. We can see that it’s still part of your drawing style. What influenced you to go in that direction? I’ve heard you like American comics. Is that where you get your inspiration from?

Takaya Imamura: It wasn’t much that I took any inspiration, rather than a very personal choice. I really wanted to get out of the luminous and colorful atmosphere of Star Fox or F-Zero. I wanted something that suited me more, and I like playing with shadows and lightning. Foreign comics probably also influenced me with styles not often found in manga. I particularly like the comic Spawn by Todd McFarlane.

In Majora’s Mask, there is that weird character named Tingle that is not very important to the overall game but is remembered as an iconic element. How did you come up with that character, and are there specific ideas that you didn’t have time to integrate with the limited development time of the game?

Takaya Imamura: The director of the game Yoshiaki Koizumi came to me with instructions. He needed a character that sells maps and that was easily visible and noticeable to the player. So I thought, let’s make him fly so that we see him from far away, and a funny way to make him fly would be with balloons.

Just with that, he immediately felt really stupid, so I had to continue in that direction, and I gave him a red nose and a full-body tight suit. The suit was influenced by Japanese culture; in Japan, many comedians like to disguise themselves with full-body tight suits, and they always look so ridiculous and corny that it makes Japanese people laugh a lot.

And where did the greedy aspect of Tingle come from?

Takaya Imamura: That was an idea of the scenario writer, Mitsuhiro Takano, who was in charge of the script, having fun with the character.

Later, when you worked on Legend of Zelda: The Wind Waker, you worked on the game and integrated Tingle into it. But after that, Tingle is nowhere to be found in the main Zelda series aside from some inconspicuous easter eggs. Do you have any ideas why he isn’t present in the games anymore?

Takaya Imamura: We don’t see him anymore because players from the United States hated the character.

Damn Americans… Can I ask you one more question about Tingle? I really like him a lot.

Takaya Imamura: He gets bashed a lot, a bit like Jar Jar Binks [laughs]. Yeah, he totally is Zelda‘s Jar Jar Binks.

At Full Frontal, we all love Tingle!

Tingle was very present in the Nintendo DS spin-off Freshly-Picked Tingle’s Rosy Rupeeland, which developed the character much more and was made by people from Love-de-Lic. This studio made Moon: Remix RPG Adventure, such as Taro Kudo. It had a much more adult tone than most Nintendo games. You are present in the credits as special thanks. Can you tell us more about your involvement in the game?

Takaya Imamura: Yes, I helped them at the very start of the project. During brainstorming, I pitched them about what kind of universe the game would be set in and also the battle system, where you throw Tingle and other characters into a cartoon-like brawl with smoke. After that, they managed the game by themselves, but I was regularly consulted as a supervisor at different stages of development.

In their later years at Nintendo, Takaya Imamura became one of the heads of Nintendo EAD Group Nº5 and directed some games, such as the Steel Driver series and Tank Troopers, that were co-developed with Vitei, a video game studio founded by Giles Goddard, an English video game programmer who had a big influence on the development of the original Star Fox game and became good friend with Imamura.

On January 20th, 2021, Takaya Imamura announced their official retirement from working at Nintendo after a career that lasted more than 32 years. After that, they became a professor at the International Professional University of Technology in Osaka and recently decided to follow his childhood dream of drawing manga. Thanks to the french publisher Omake Books, Imamura published their very first manga, Omega 6. 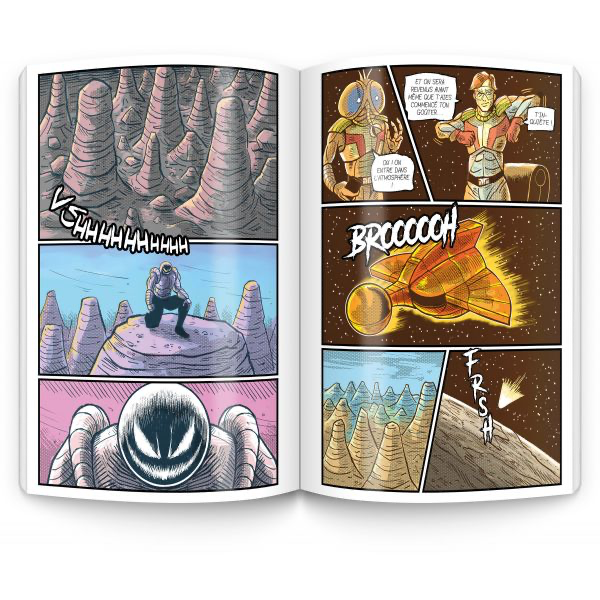 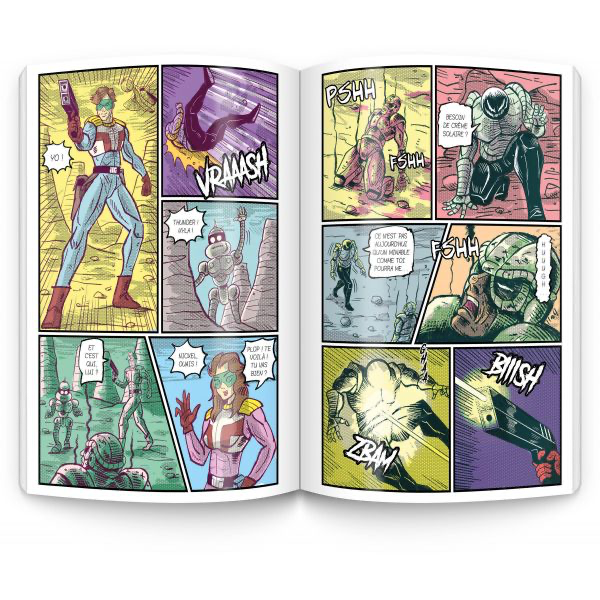 You’ve released your very first manga named Omega 6 with the French editor Omake Books. It has an aesthetic very different from most mangas. What have been your influences?

Takaya Imamura: I particularly like the American comics aesthetic. I’m a big collector of them, and particularly I’m a big fan of Spawn by Todd McFarlane. I collect a lot of figures made by McFarlane Toys.

You also announced that you are making a spin-off game of your manga, Omega 6. Can you tell us what led you towards media mix and what the game will be about?

Takaya Imamura: I hadn’t thought about making it a media mix at first. It was only when the manga was ready that we decided to make it a media mix. I work alongside a studio named Happy Meal. It will be a text adventure game with a retro feel to it. It won’t be an adaptation. It will be a whole new story set in the same universe. 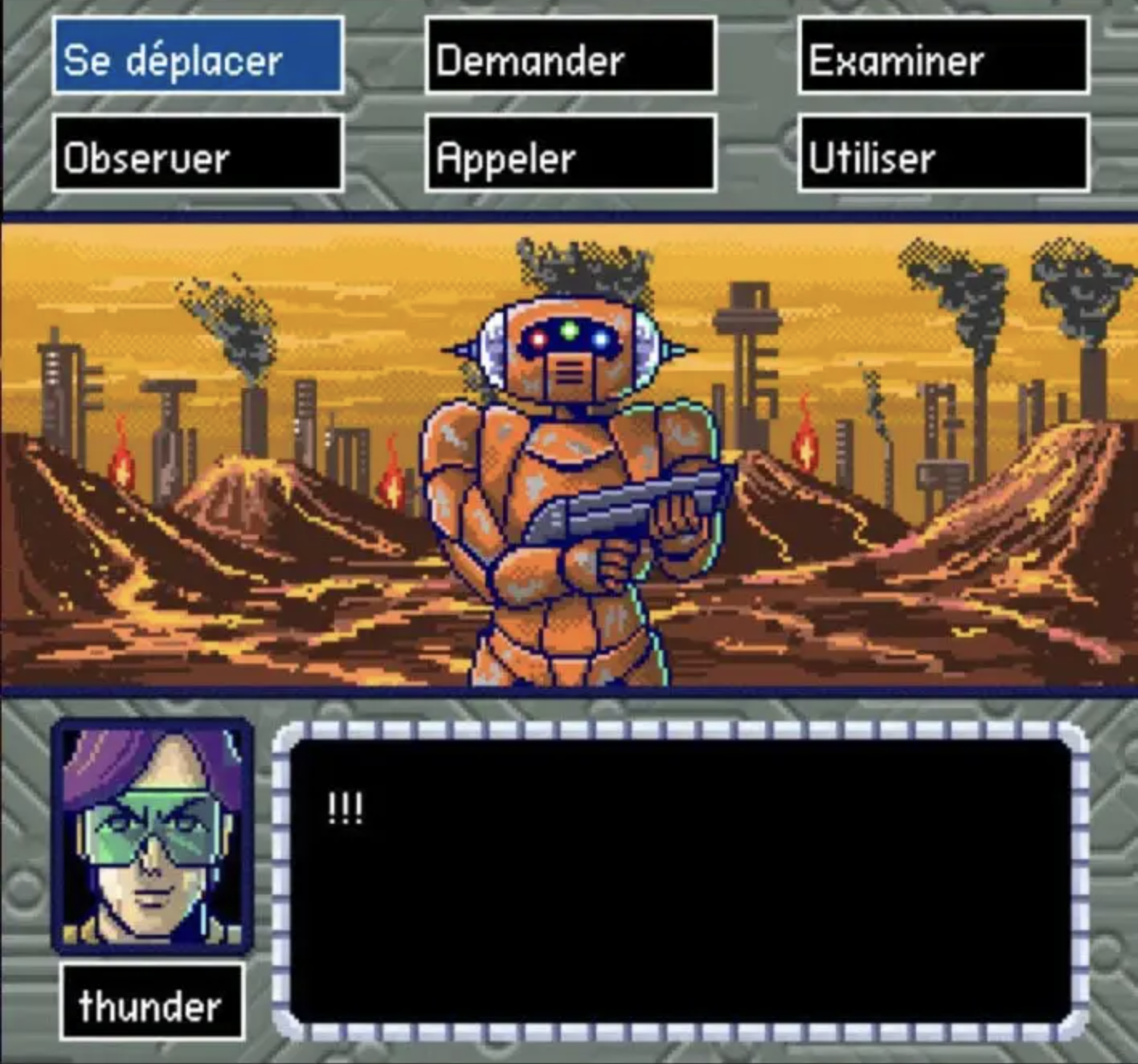 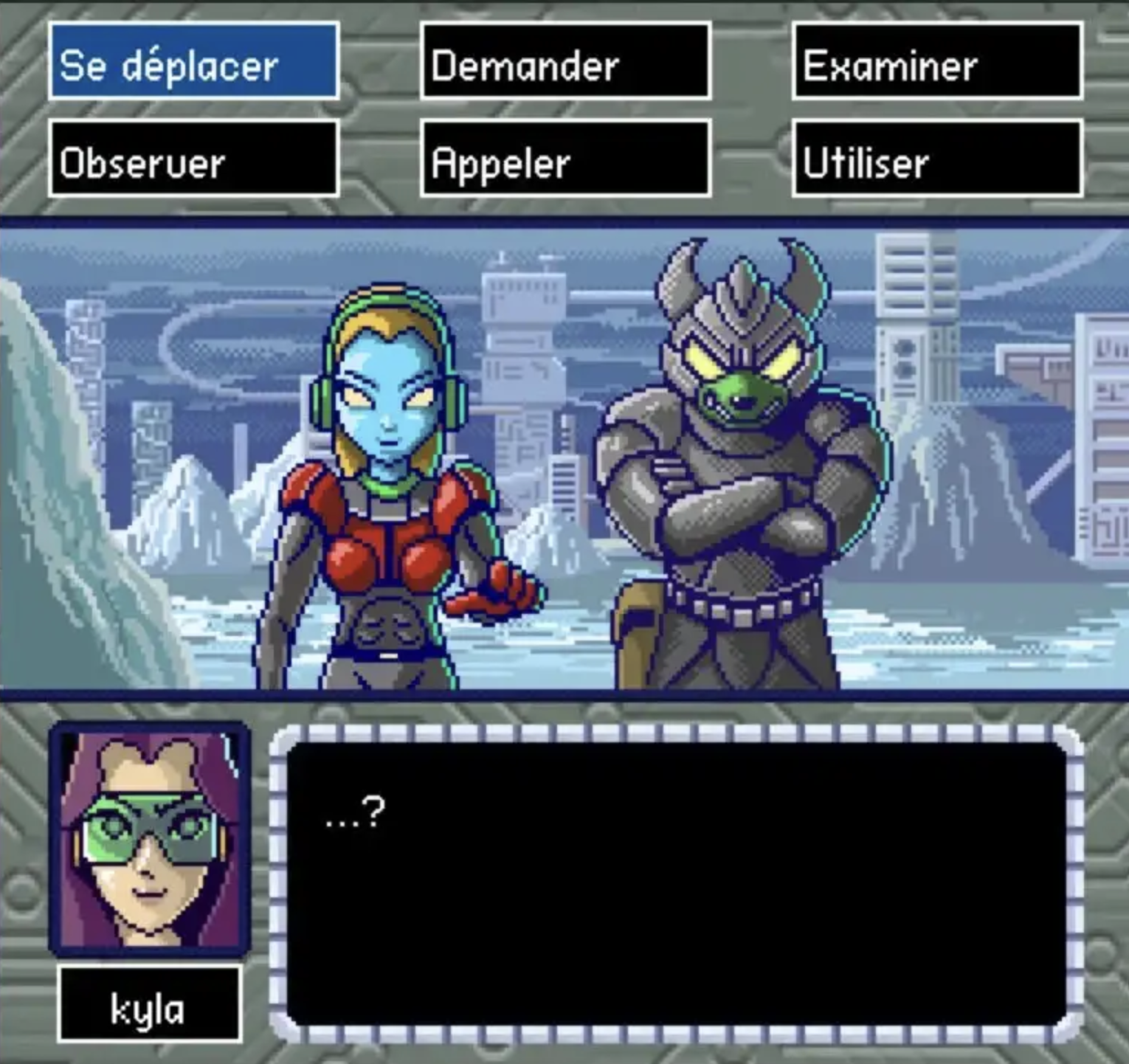 Hiroki Taniguchi is an independent anime and film producer and director who is the head of the studio Public Arts, a tiny company as it has only one permanent member: himself. Mr. Taniguchi has been selected to participate in the ongoing initiative by JETRO aiming...

END_OF_DOCUMENT_TOKEN_TO_BE_REPLACED

Picona Creative Studio is an anime studio focused on 3DCG animation. Known in the industry for using cell-like 3DCG, they have worked on a wide range of popular anime series, such as Aikatsu! or Chainsaw Man.  Currently, the studio is holding a crowdfunding...